The Scotch whisky sector had a torrid year as the pandemic and punitive tariffs saw its sales come under pressure. But one brand managed to record decent growth among its million case competitors. Diageo’s blended Scotch whisky brand White Horse rose by 18.9% to 2.1 million cases in 2020, after witnessing consistent growth for the past five years. The brand’s strong growth was the highest among major brands, with the vast majority of million case sellers reporting declines.

Figures from the Scotch Whisky Association showed the value of Scotch whisky exports fell by £1.1 billion (US$1.5bn) in 2020 to its lowest level in a decade as a result of the pandemic and US imposed tariffs. In 2020, exports of Scotch whisky fell by 23% by value to £3.8bn. But the sector did get good news in March when US tariffs on single malt Scotch were removed for a four month period.

Million case single malt brands The Glenlivet and Glenfiddich also struggled to increase their sales, despite both brands registering consistent year on year growth. Glenfiddich’s volumes tumbled by 20.2% and The Glenlivet fell by 7.2%.

GLENLIVET INCREASES ITS RANGE ON THE MARKET 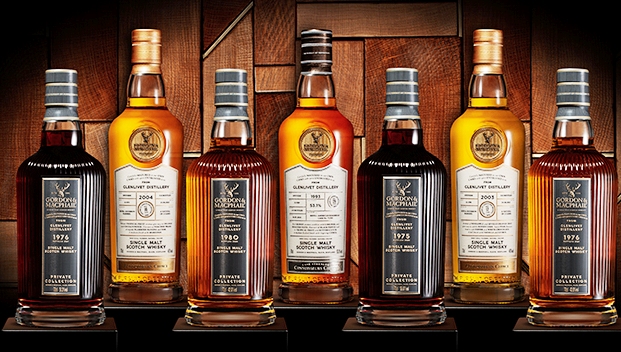 Gordon & MacPhail has debuted seven Glenlivet bottlings across two of its ranges ­­– Private Collection and Connoisseurs Choice. Glenlivet’s style of spirit is often highlighted as a classic example from Speyside – smooth, light, fruity and slightly floral. Spirit from Glenlivet can withstand long-term ageing, managing to retain its delicate character. It thus becomes imperative to select quality casks, made to exacting specifications, to ensure the spirit is not overpowered. Typically, Sherry casks are used for spirit earmarked for long-term maturation, with Bourbon casks deployed for shorter-term expressions although there are always exceptions to the rule.

Priced at £1,750 (US$2,434), the 1975 whisky is described as having blackcurrant aromas, and notes of dark chocolate and bitter orange on the palate. The 1976 bottling aged in refill American hogshead offers lemon peel and green apple on the nose, with hints of white chocolate and leather on the palate. The 1976 whisky aged in first-fill Sherry casks offers ‘rich Sherry aromas’ and ‘flavours of strewed red berries’. The 1976 whiskies are both priced at an RRP of £1,500 (US$2,086). The 1980 bottling has a tropical nose and Seville orange and lemon zest on the palate. It is available to buy for £1,250 (US$1,739).

The Connoisseurs range has welcomed a 1993 whisky matured in a refill American hogshead, and 2003 and 2004 bottlings that have both aged in refill Bourbon barrels. Priced at £265 (US$369), the 1993 expression provides desiccated coconut and dried banana on the nose, along with tropical fruit and grapefruit on the palate. The 2003 bottling offers an aroma of pineapple, Seville orange and nut, while the palate brings hints of pears, grapefruit and white pepper. It is priced at £127 (US$177). Finally, the 2004 whisky offers a nose of green apples and tropical fruit, leading to pineapple, mango and flambéed banana on the palate. It is available to buy for £104 (US$145).

In 1824, before founder George Smith licensed his distillery, the remote Glenlivet valley was the perfect location for the illicit scotch whisky trade, with distilleries handcrafting in smaller copper stills in bothies well hidden from the law.

It was there in the isolated valley that George Smith would learn his craft, slowly and carefully distilling what would soon become the world-renowned single malt scotch whisky that established the signature fruity floral Speyside style.

The Glenlivet has launched The Glenlivet 12 Year Old Illicit Still, a Scotch whisky inspired by the illegal past of this Speyside distillery, reminding all how this spirit was first crafted in the early 1800s. The new offering from the Speyside distillery is the first in a series of limited-edition Whiskies known as “The Original Stories” range, which celebrates “the brand’s passion and originality.”Bottled at 48% ABV, this limited-edition malt has not been chill filtered, adding an authentic taste of their history.

The Glenlivet 12 Year Old Illicit Still references distillery founder George Smith, who once distilled his whisky in small copper stills hidden in the Glenlivet valley. The Glenlivet’s traditional fruity and floral style is present in this limited-edition Scotch, characterised by tropical and sweet notes.

The design for The Glenlivet 12 Year Old Illicit Still alludes to the oldest bottle in the brand’s archives. It features copper highlights that represent the stills that illicitly produced the whisky in the 1800s.

The Glenlivet 12 Year Old Illicit Still is available in select markets for a suggested retail price of $69 per 750-ml. bottle. 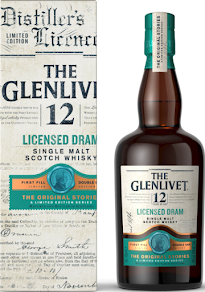 Pernod Ricard has released another aged expression from its The Glenlivet Scotch whisky brand.

The Glenlivet 12-Year-Old Licensed Dram has been aged in first-fill US and European oak casks. The iteration, the bottle design for which is based on the oldest Glenlivet expression, is the second from the single malt’s ‘Original Stories’ series, following the launch of 12-Year-Old Illicit Still last year. The limited-edition series will be added to annually for UK-based consumers.

The Licensed Dram is a new take on the single malt that started it all. With online continuing to be an important channel for gifting this Christmas, and consumers searching for premium options that offer something more special, this new release is primed to tap into this consumer trend.

The Glenlivet has released its Caribbean Reserve, a non-age-statement Scotch whisky finished in ex-Caribbean rum casks. The new blend offers a sweet taste with hints of tropical fruits, honey and cinnamon, the company says, providing a tropical twist for single malt Scotch, in time for the summer months. The new flavour is available nationwide.

The world of The Glenlivet Scotch single malt whisky is gradually building into a diverse amount of expressions. Cask finishing is in the mix at this Scottish distillery. Finishing is also front centre with one of their latest releases, this time with a decidedly Caribbean twist.

The new The Glenlivet Caribbean Reserve, according to those behind it, is a non-age statement Scotch single malt whisky that’s partially been finished in barrels that once held Caribbean rum. It is being described as a “single malt scotch whisky a tropical twist” and is particularly targeted towards cocktail recipes. This follows other recent cask innovations from the company, including The Glenlivet 14 Year Old finished in ex-Cognac casks.

The Glenlivet and Glenfiddich are two distilleries locked in battle for top spot globally in the single malt arena. They both sell in common markets while taking the lead in specific markets, like The Glenlivet in the USA. Both exhibit that classic Speyside style of being grassy, floral, sweet and malty, with that little extra “zing” for good measure. With Glenfiddich, the zing comes in the form of pear drops, whilst Glenlivet is fruity with a citrus tang. Both drams are textbook examples of Speyside whisky.

In the context of today’s single malt boom, it’s a situation that’s harder for today’s new drinkers to appreciate, but there was a time when single malts were rarely known and marketed outside of Scotland. Glenfiddich took a massive – and incredibly risky – step when they became the first to actively market their whisky as a single malt in 1963. It was a game changer that impacted the landscape forever.

The core range of any distillery’s portfolio is a moving target and never stays static for too long. Fortunately, in the case of both distilleries here, there are plenty of different expressions to keep the palates of fans amused and satisfied. As is often the case, the different aged expressions reflect a different wood or cask regime, and there are numerous releases from both distilleries here to showcase a wide spectrum of flavours from under the same roof. On the basis of what’s currently available in terms of sheer range, accessibility, and diversity of expressions, Glenfiddich has the edge. The Glenlivet does not have a commanding presence in the older bottling field. They have initiated moves to set this discrepancy right and the recent past has seen a surge of bottlings by The Glenlivet in the 14 YO range.

THE GLENLIVET 14 YO COGNAC CASK FINISH 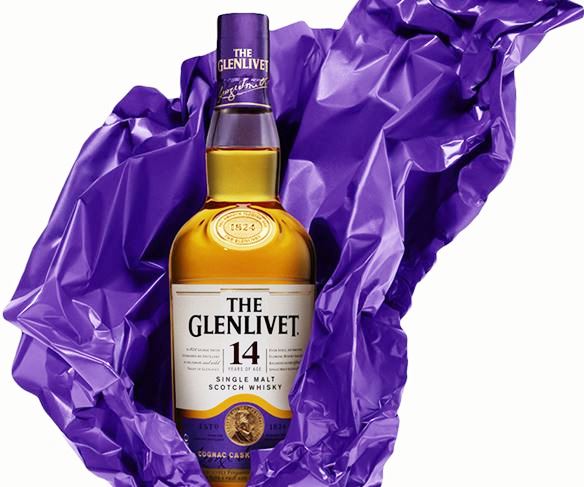 The Glenlivet Scotch single malt whisky distillery, owned by spirits giant Pernod Ricard, has plenty of whisky to throw around, allowing this operation plenty of latitude in what they release. One such variant is the exploration of finishing expressions in other types of casks, as is what has happened recently with the debut of a new bottling finished in ex-cognac casks.

The new The Glenlivet 14 Year Old, according to those behind it, is being targeted towards “a new generation of whisky drinkers through bold and unconventional flavor combinations and finishing techniques.” It is first aged in first fill American/sherry casks, before being finished for an undisclosed amount of time in ex-cognac casks.

This Glenlivet 14 Year Old was crafted with the curious single malt community in mind. True whisky lovers know that their palate is always evolving, searching for the next flavour experience, and were expecting this delicious aged single malt, with portions selectively finished in ex-cognac casks. The blend of rich Cognac-cask flavour influences and the signature fruity, smooth style is guaranteed to captivate single malt drinkers looking to explore.

Following the success of its 13 YO Sherry Cask in 2018, the new release pays homage to the region and its travelers and is a permanent travel retail exclusive for Taiwan. The Glenlivet said it had tailored the 14YO expression to match the sophisticated palate of Taiwanese whiskey drinkers.

Unlike other editions within The Glenlivet portfolio, the Sherry Cask Matured expressions are created exclusively for Taiwan. They are matured in hand-selected 100% Oloroso sherry casks to give rich sherry notes, with an added layer of richness and spiciness. The fruity floral 14yo has a full nose of blueberries, blackcurrants and plump sultanas with a dusting of cinnamon. The flavour of milk chocolate with rich toffee and hazelnuts lingers on the palate before ending in a long, warming finish.

Taiwanese whisky industry experts lauded the move, applauding The Glenlivet’s choice to create an exclusive homage to the Taiwanese market. The whisky community is growing exponentially and the appetite for single malt Scotch whiskies in Taiwan has never been greater. Thanks to its multi-layered complexity, it can be enjoyed neat or in a classic cocktail and is suitable for both whisky connoisseurs and novices and is perfect for whisky enthusiasts or special occasions.

Cask 210770 is a single First Fill ex-Oloroso Sherry Butt that’s been maturing for 14 years in anticipation for this moment, hand-selected by Glenlivet’s Master Distiller and industry legend Alan Winchester.

Bottled at its natural cask strength of 59.3%ABV and without chill filtration, The Glenlivet 14 Year Old First Fill ex-Oloroso Sherry Butt is a whisky that’ll send you to Speyside Sherried heaven. With plums and poached pears on the nose, marzipan, dark chocolate and lemon peel on the palate, and a long lingering finish of toasted almonds and warm spice, it’s a sumptuous must-have Sherry Bomb.

Strictly limited and exclusive to The Whisky Club, this very special Glenlivet Single Cask release presents an extremely rare opportunity to savour the world’s biggest selling single malt in its most natural state - bottled pure, straight from a single cask at natural cask strength. This one sold out in mere moments.

NOSE: A burst of fresh citrus kicks in along with plums and poached pears, rounded out by freshly baked banoffee pie with a dusting of cinnamon.

PALATE: Lemon peel, marzipan and ginger spice really sing. Dried fruits of sultanas and raisins come through before treacle toffee and a hint of dark chocolate take over.